Leveling up, meditation, and Fire Deviations

Righteous Blood, Ruthless Blades is a darkly themed wuxia roleplaying game. Our vision for the game was for both NPCs and player characters to be able to emulate the unique and eccentric characters that often appear in the wuxia genre, especially the works of Gu Long. He creates heroes and villains who stand out from the crowd and make an impression in the reader's mind. For instance, check out the following character introduction from his novel The Eleventh Son. Despite having read this novel about fifteen years ago, I've always remembered this particular character, who is actually just a minor villain.

When [the fourth man] emerged, everyone was taken aback. His appearance was bizarre. He was less than five feet tall, but he had a massive head with disheveled hair. His shaggy eyebrows were so thick they almost merged. His left eye glistened like a bright star, but his right eye was as ashen as a dead fish's. His bushy mustache covered a blood-red mouth. His right arm was severed at the shoulder, but his left arm was so long it almost touched his toes....

Some of the spectators had guessed the identity of this man. [He was]... the One-Armed Hawk King!

To encourage players to create unique and eccentric characters, we included an Eccentricities phase during character creation. For the most part, the initial Eccentricities are for flavor purposes and don’t affect the characters mechanically. In this way, players can create classic wuxia trope characters such as a one-armed swordsman or a blind beggar without having to worry about being hamstrung mechanically. However, it is also possible to acquire eccentric characteristics during gameplay, which do have mechanical weight or roleplaying implications. It can happen because of being maimed in combat, or by intentionally pushing beyond one's limits to learn more martial arts than is considered safe and healthy.

Another way it can happen is by making mistakes when leveling up. When characters meet the requirements to rise in level, they must meditate for a number of days equal to the level being entered. In other words, a character going into the second level would need to meditate for two days, while going into the third level takes three days, and so on. Each day, the character must make a successful Meditation skill roll to proceed to the next day. When all of the successful Meditation rolls have been made, the character rises to the next level. However, if the character fails three successive Meditation roll attempts, their session of meditation is aborted, and while they are still allowed to rise in level, they also experience Fire Deviation.

Fire deviation (走火入魔 zouhuo rumo) is a real-life term and a complicated topic in general. In fact, I devoted an entire YouTube video to it, explaining the etymology, history, etc. There is also a rather lengthy Wikipedia article about it, although that article focuses on real-life explanations and doesn't get into how the term is portrayed in wuxia. There are different ways to translate 走火入魔, but “fire deviation” has been used in wuxia movies and novels for many years, so we chose to go with that version. In a nutshell, fire deviation is when someone makes a mistake made in meditation, martial arts, internal energy cultivation, etc. It’s something that is often mentioned in wuxia, but isn't frequently depicted on-screen or in the narrative. It’s more common to hear people talking about it after the fact, or worrying about the possibility of it happening. In some cases, people who suffer from it are described as being sick or crippled. Here’s a passage from Gu Long's 7 Killers, describing one of the most powerful martial artists in the Jianghu of the novel.

Dragon Fifth sat on the restaurant’s upper floor, in an elegant private room on a wide bench. His face was pale white, his body thin and haggard, and in his eyes, he carried unspeakable exhaustion. He looked to be not only tired, but also physically weak, even sick....

Perhaps he had some congenital condition, or perhaps he had experienced fire deviation when practicing martial arts. In any case, he’d acquired some strange illness, and it tormented him like maggots gnawing on his bones.

Sometimes, though, fire deviation is described as providing increased strength and power, or perhaps supernatural or superhuman abilities, although generally along with negative consequences. For instance, check out this scene from the 2017 Ode to Gallantry television show (based on the Jin Yong novel of the same name), in which a villain experiences fire deviation in the middle of a fight scene. Although Righteous Blood, Ruthless Blades doesn't allow for fire deviation in combat, it is possible to gain enhanced abilities or powers because of it.

In Righteous Blood, Ruthless Blades, gaining a Fire Deviation involves both mental and physical consequences. The player will roll on a set of extensive nested tables to determine which afflictions they experience. Some have mechanical weight in gameplay. For example, on the mental side, you might be struck with amnesia and be forced to make a Reasoning skill roll to remember anything. On the physical side, your hands might turn into twisted claws that do extra combat damage. Other Fire Deviations are more geared toward roleplaying. For example, on the mental side, you might believe yourself to be an animal or inanimate object in human form. On the physical side, your throat could be damaged, forcing you to speak in a raspy voice. There are some Fire Deviations that have no weight at all, such as developing glowing eyes or having your teeth fall out.

In our playtesting, leveling up and Fire Deviation were some of the most enjoyable and entertaining aspects of the games. Making meditation attempts, and either narrowly avoiding Fire Deviation, or ultimately experiencing it, was just very fun. And of course, the process of gaining the new Eccentricities and having one’s character transform into a bizarre and unique martial arts expert can be a blast. Take a look at this artist's depiction of my own playtest group, courtesy Xiaofanchuan. These are all high-level characters, most of whom picked up at least one or two Fire Deviations along the way, and one of whom accumulated over ten. If you look closely, you can see things such as claws, veiny skin, a third eye, glowing marks, etc. And that's not to mention the mental Fire Deviations. 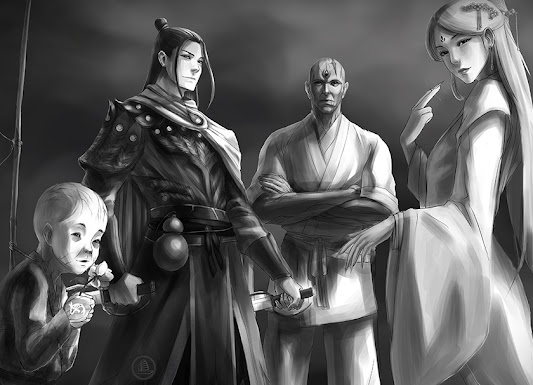 I do have a few bits of advice for GMs and players regarding leveling up. It is highly advisable for any players who do not want their characters to change physically or mentally to have a high Meditation skill. In playtesting, there were some players whose characters ended up with few or even no Fire Deviations at all, thanks to having a high Meditation skill and succeeding on their rolls when leveling up. On the other hand, players who like the idea of their character slowly becoming eccentric or even mad, much the same way characters tend to do in games like Call of Cthulhu, or developing bizarre or enhanced physical characteristics, can simply refrain from putting any points into Meditation. Because the number of successful rolls required increases by level, the chances of failure also increase. On a mechanical level, the extent to which Eccentricities are part of the game is largely up to the players.

It should be noted that some of the Fire Deviations require a higher-than-average level of skill either for the player or the GM. For example, some lead to changes in personality. And more than one involves experiencing hallucinations or delusions that are controlled by the GM. Suppose a playgroup has newer players, or perhaps players who don’t like heavy roleplay, voice acting, etc. In that case, the GM might consider letting them re-roll if their result requires extensive skill or experience in roleplaying. And a GM who does not feel comfortable managing complicated GM-involved versions should consider skipping those.

Suffice it to say, I found meditation, leveling up, and Fire Deviations to be one of the most entertaining aspects of the game. Furthermore, they provide fantastic possibilities for character growth, and can be a delight for players who enjoy playing the role of interesting, unique, and distinctive characters. As usual, if you have any questions or comments, please reach out to me via the social media links listed at the bottom of the page. For more information about me, check out my website. And if you haven't already, make sure to pre-order the game now!